Some months ago, Bubbles and I and our nutcase friends, who by the way feature in my blog through periodic mention; visited Siena in Italy. (Read Siena blog here) We also paid homage to its  rival city: Florence. They say you either like one or the other, Siena for its gothic-style buildings or Florence for its renaissance-inspired architecture.

I can’t really make up my mind which city I prefer. It kind of represents the non-committal person I am…and like most psycho-analyses reveal, this one can be traced back to childhood.

Me: (I do something naughty and anger mum, then run around the dining table knowing mum can’t catch me)

Mum: (looking murderous like scary Goddess Kali and wielding a ‘rotan’ i.e. a feather duster that doubles as child-beating weapon) ARE YOU GOING TO COME HERE OR DO YOU WANT ME TO CATCH YOU? IF YOU DON’T COME HERE AND I CATCH YOU, YOU WILL GET TWICE THE BEATING!!

Me: ( I freeze on the spot and weigh the options. Little did I know that at the tender age of five I was already dealing with mathematical problems like ‘probability’ in my mind!)

But I digress. Where was I? Oh yes, Florence. Here’s Ponte Vecchio…one of the most recognised sights of Florence. 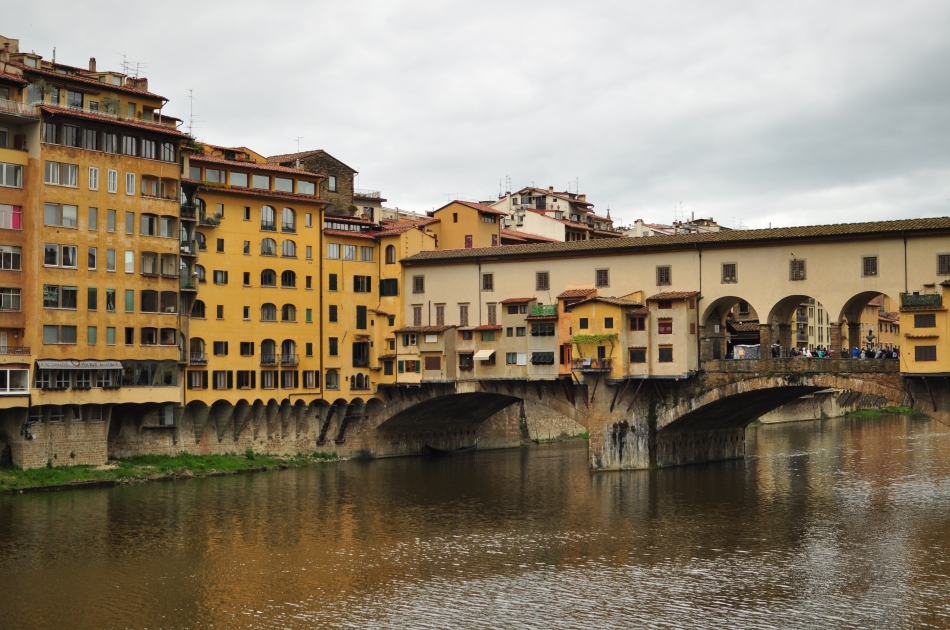 Ponte Vecchio does not boast of the pointed arches or elaborate mythical creatures that epitomise Gothic buildings. Instead it almost looks like a nondescript apartment over the river, but yet there is something enchanting about this structure, with its arched bridge crossing the Arno river.

The walk across the bridge is equally bewitching. There are interesting shops that line both sides of the bridge. 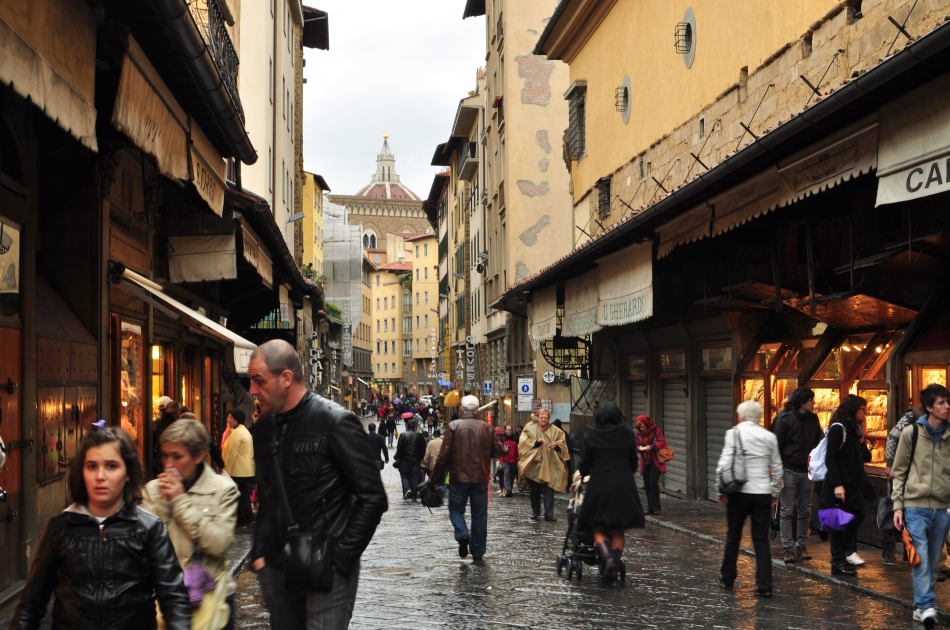 Apparently, the economic concept of bankruptcy originates here. When a merchant could not pay his debts, the table on which he sold his ware (the “banco”) was broken (“rotto”) by soldiers. This practice was called “bancorotto” – broken table, or possibly “bancorotta” – broken bank. Without his table, the merchant was not able to sell anything.

Interestingly, Siena hosts the oldest surviving bank in history; Monte dei Paschi, established in 1472. I can see signs of rivalry having its roots here. Bankrupt Florentians must have asked said bank for funds and got rejected in the face. 🙂

I think Florence and Siena have another distinct difference between them. Florence must have had all the muscular, macho men. How else would you explain the fact that only Florence is dotted with anatomically perfect statues such as this? 🙂 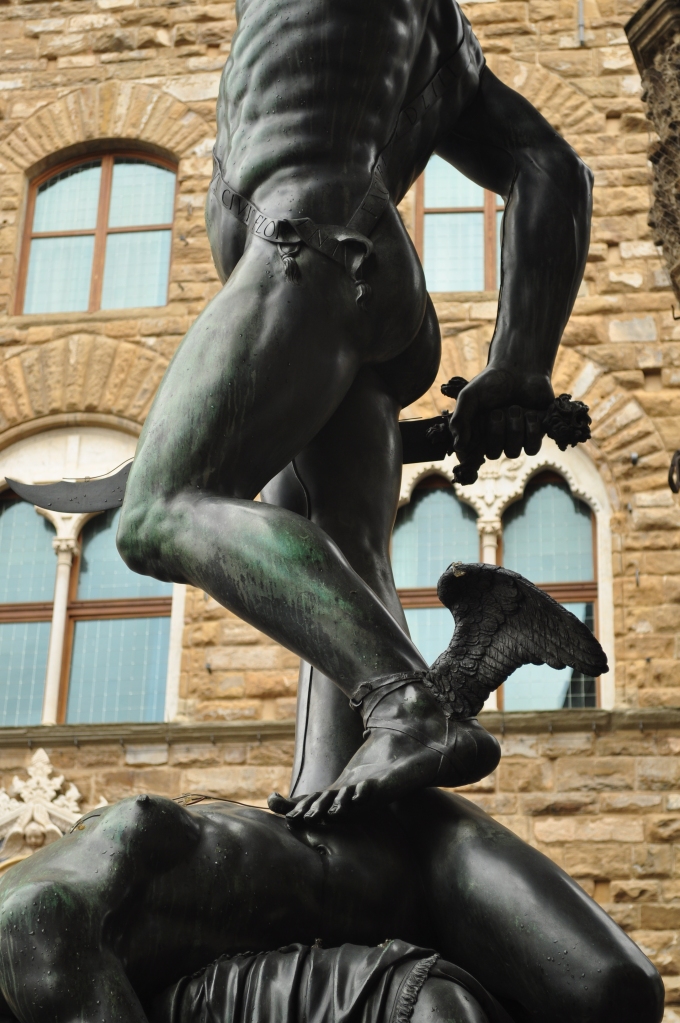 I reckon Siena must have had fatties (or flabbies!) as there’s not a single statue celebrating a man’s hot, muscular bod! That could also be where the rivalry originates…can you imagine the wrath stemmed by bodily insecurity and envy? 🙂

Here’s the Statue of Neptune. He’s a bit too bulky for my liking and there’s something odd about the kid standing between his legs. Wait a minute…he’s not a kid. He’s got pubic hair! So, there are two odd things about the kid-statue. Look at his ding-ding. It looks frayed at the edge! 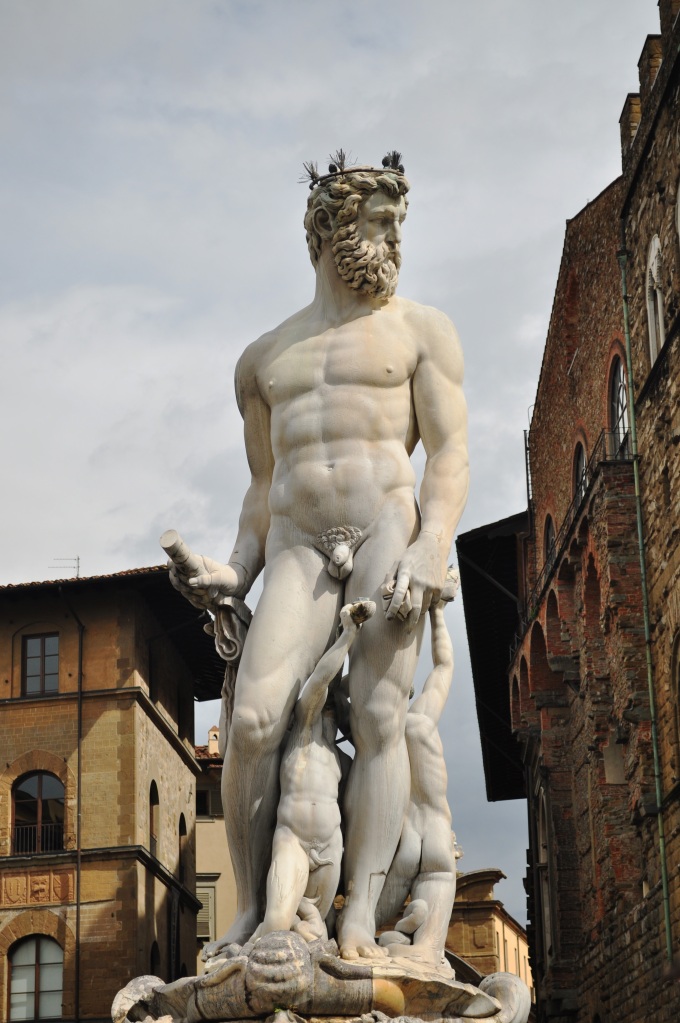 Pray tell what that’s supposed to be! I’m intrigued. So there you go: possible another difference. Maybe there was so much testosterone coursing through the veins of Florentine men that they reached puberty at seven!

Sounds to me like architecture had nothing to do with the two cities’ rivalry. They each coveted what the other had! Like a lot of unproven historical research, I present to you these hypotheses so you can make a valued judgement. (I can tell I would be a very capable historian) 🙂

Have you noticed the frayed genital before or seen any other odd statues in Europe? Do tell me about it!

This entry was posted on May 31, 2012 by Menaka. It was filed under Photos, Travel and was tagged with Florence, Humor, Italy, Photography, Piazza Della Signoria, Ponte Vecchio, Renaissance, Siena, Statue of Neptune, Travel.